She spent thousands of years locked in a mirror, unable to talk except to answer her captors’ questions, unable to tell either side she wasn’t the enemy.

Escaping to Homeworld, they locked her up again. “Rebel, traitor,” they called her, and dragged her along as they abducted her only friend. To save that friend, she gave in to Jasper’s forceful advances in order to trap both of them under the sea, locked together as abusive lovers for months on end. She was practically shattered by the time the Crystal Gems saved her and gave her true freedom at last, but now the Diamonds are coming back.

Who wouldn’t have run?

After the “Steven Returns” batch of episodes, Lapis found out Steven pissed off Blue and Yellow Diamond again. She freaked out and wanted to flee to outer space with Steven, Peridot, Pumpkin and the barn. Her friends didn’t want to go, so she ended up leaving with only the barn and everything in it.

Taking the barn seems to be what set off a sizable faction of the Steven Universe fan base. Memes are circulating about how Lapis is the “worst gem.” Lapis shared that barn with Peri, after all, and it was full of the Meep Morps and videos they both enjoyed. (Although Peri seemed slightly more enthusiastic about their avant-garde art.)

But Peridot still has Steven, Pumpkin, and even the Crystal Gems (who Lapis never forgave for holding her captive in that mirror). Lapis, moving to some unknown corner of the universe, will have only her memories. And hopefully electricity so she can finish watching “Camp Pining Hearts.”

Lapis seems to have spent a lot of time vegging out in front of that TV. Steven Universe has shown scenes where Lapis pays little attention to what’s going on around her, just shutting herself off from reality as she zones out in front of that TV. Her sometimes-unkempt hair, the subject of a lot of memes, would also provide a clue that she may have tried disconnecting. But activities with Peridot, the Meep Morps and farming, kept Lapis from withdrawing into herself after her well-documented trauma.

Wherever Lapis is, she’s probably hugging that alien stuffie and thinking of Peri.

But fans haven’t seen that yet, and they have seen Peridot looking like this. 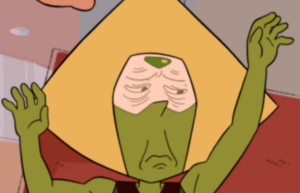 Lapis has had a history of being mean to poor Peri, Peridot might have been mean to her, but again, fans haven’t seen that. They did see Lapis crush Peri’s tape recorder and tell her to go away. While they may have forgiven her for that when they were together and bonding, Lapis’ absconding with the barn and all Peri’s things open up a lot of old wounds.

But Lapis isn’t that bad. While a prisoner of Homeworld, she didn’t tell Jasper or Peridot about Steven. She may not have told Jasper about The Crystal Gems either; Peridot had seen them all before.

Fans can debate whether or not her decision to trap both herself and Jasper was a decision made out of revenge or a desire to protect Steven. But in the episode “Chille Tid,” she forbids Steven from helping her and tells him “Just let me do this for you!”

Lapis certainly has some issues, and she’s been called “toxic” by some fans, but anybody would be. There are two people she cares about very much: Steven and Pumpkin. And possibly Peridot, which she may still prove later In the series. Given how TV shows typically go, she’s almost certain to return at some point to make amends for leaving. This will be when Lapis shows her heart again, and most fans will probably forgive her for stealing the barn.