The latest video released by The Sweetie Bot Project shows an animatronic, prototype Sweetie Belle taking steps toward a 3D printer, looking back and forth between the printer and the camera as the printer forms another piece of Sweetie Bot 2.0.

Since last year, a team of Russian Brony engineers has been working on a project to bring the “Sweetie Belle robot” meme to life. And although artificial intelligence still has a long way to go, these engineers have some lofty aspirations.

“We believe that in future, humans and pony robots will be able to be friends and live together in peace and harmony,” according to Sweetiebot.net/about.

The Sweetie Bot Project has already completed its proof of concept prototype. The prototype Sweetie Belle can walk, talk, and look at you with blinking, digital eyes. The next project, already in production, will create a Sweetie Belle with a smoother exterior of white plastic which could easily be slipped into a fabric cover. 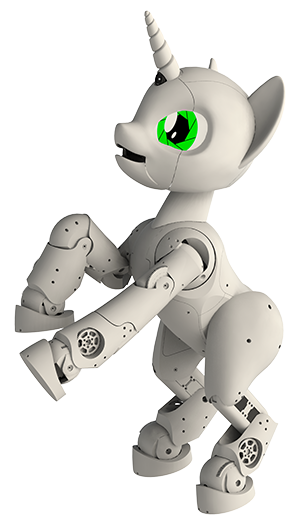 All software and designs will be open-source by the end of the year. The Sweetie Bot Project estimates the cost to build a Sweetie Bot at home will be about the same as a high-end gaming platform or a 3D printer and the programming uses free software. Although a true, thinking artificial intelligence is still a little out of reach, The Sweetie Bot Project expects these Sweetie Bots to be about as intelligent as a decent videogame AI. Programmers are adding behaviors and hope to add voice and speech recognition, as well as face detection and event recognition.

The Sweetie Bot Project is hoping to partner with other developers and offers its designs for modification, allowing for designers around the world to communicate and trade ideas.