Steven Universe is one of those shows that hides several little Easter Eggs for the attentive fan to find. Early in the show, fans might have wondered why the door at the temple had five gems when there were only four Crystal Gems, including Rose Quartz. We found out the reason when we met Ruby and Sapphire. And SU showed us the secret of the glowing bracelet in the freezer the very second episode.

But there are a lot of secrets fans have noticed that have no answers yet. What was in that chest inside Lion’s mane? (And why didn’t Steven even try to open it?)

How about that explosion after the Homeworld Gems fled Earth at the end of the war? 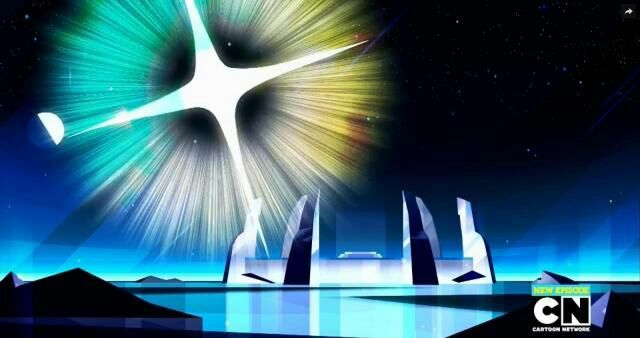 During Lapis Lazuli’s flashback episode, “Same Old World,” we got a first hand account of how the Homeworld Gems evacuated Earth. Right before the flashback ended, we saw a colorful explosion in the sky that Lapis didn’t explain.

We actually have two different accounts of this explosion. During “Monster Reunion,” Centipeetle gave us a colorful account via crayon of the Homeworld Gems racing to the escape. Centipeetle and her crew didn’t make it, and the last we saw before she broke down into tears was a flash of white spreading over the paper.

Since this whole backstory centered around the mystery of Centipeetle’s corruption, it’s not a stretch to think this flash, whatever it was, caused the corruption. Since that mystery was never solved in-universe, and Peridot said that Homeworld doesn’t have corrupted gems.

Unlike some of these Easter Eggs, “Same Old World” and “Monster Reunion” give us all the tools we need to peace this little puzzle together. For example, who set off the explosion?

The Other Room on the MoonMoon

During “It Could Have Been Great,” Steven lags behind the other Gems to take a look into a room with what looks like a floating ball. It’s a “Blink and you’ll miss it” moment and the room, floating ball and all, doesn’t really look that interesting.

But a 12-minute program did take just a little bit of time to show Steven stopping to look into this room. It took us out of the flow of the story, however briefly, so this shows us that this room must be significant.

The dimension in Lion’s mane is an Easter Basket full of these eggs. Rose’s sword, Bismuth’s gem: we got the answer for these two things, but Steven has yet to open the treasure chest we first saw in “Lion 3: Straight to Video.”

Steven has never even tried to open this thing, which seems odd. But that could be because there’s no oxygen in this world. Not much time to look around and think before you have to roll back to the bottom of that hill and gasp for air.

The Pink Pillars in the Desert

In “Lion 4: Alternate Ending,” Steven went on a quest to find out what a pink key opens. Not the chest, apparently.

This led Steven to another tape, but the point of this little mystery centers around the two pink pillars by Rose’s trash pile.

Homeworld Gems enjoy making their ships look like body parts; Blue Diamond and Yellow Diamond both have ships that look like arms. (Blue’s ship is the left arm, Yellow’s is the right.)

Fans generally agree that the pillars have to be Pink Diamond’s ship, partly buried under the sand. But is it an arm or is it a pair of legs? Scare just isn’t consistent enough to figure that based on Steven’s height.