This could be one of those situations where purist fans of the original work hate the new adaptation. I remain a big fan of both the movie and the novella and I shit my pants with joy when I heard it was getting a series.

Until I saw the trailer.

​I’m not a big fan of over-the top gore, in general. But that sort of splatter has its place.

The original movie, The Mist is the perfect example of a movie that used gore to further a story that required it.

Will the series stay true to this subtle distinction? Well you can’t really judge by a trailer, but I will say the trailers dampened my enthusiasm just a bit.
Compare the trailers for the movie. They didn’t give you any frickin’ idea what was going on and I didn’t read the novella until after I saw it.

But the trailer for the series pretty much could have been any SAW movie ever made. No sense of wonder, nothing left to the imagination. And those things are indispensable for an adaptation of The Mist.

In both the novella and the movie, there was a heavy emphasis on the unknown. An extra dimensional Eco system had just been set loose on the world, putting humanity close to the bottom of the food chain. How in the name of hell were they going to survive when they didn’t even know what the hell was out there.

This was why I practically prayed for The Mist to keep going. I wanted to see how humanity adapts when they’re crawling around like bugs, half blind, and trying to survive in a world ruled by shit like this! 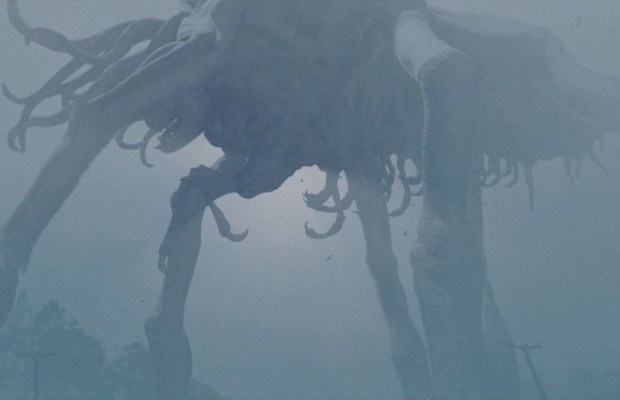 Keeping in mind the misleading nature of trailers (meaning I could be wrong) my fear is that the series is going to rely on shock and disgust to make an impact, taking imagination out of the equation like 99 percent of the overproduced crap we’ve already got out there.

And one more thing: who’s fucking? idea was it to make the Mist psychic?