In the sugarcute alternate reality of My Little Pony, there is only hugs. To be a brony in such a fandom is to be one amongst untold thousand. It is to live in the brightest and most flamboyant fandom imaginable. Forget the trolls on Twitter and the rudeness of autism memes, for there is no judgment in these conventions. Only an eternity of fan art, music, and the laughter of Pinkie Pie.

As with all fandoms, Warhammer 40,000 has a good share of brony haters. But judging by the comments and shared art of both communities, these fandoms overlap much more than they should. The grimdark Warhammer 40K and diabetically cute MLP ought to mix about as well as oil and water, but the internet consistently sees fan art of ponies dressed in space marine armor or space marines bearing cutie marks as their standards.

One possible reason lies in the birthplace of brony fandom its self, 4Chan.

Before the failed brony purge of 4Chan, a new fandom began an all-out assault on the worst trolls of the internet, and their weapons were love and kindness. Bronies descended on /b/ and other boards with all the unstoppable fury of Hive Fleet Leviathan, spamming pony memes, fan art and positive affirmations. This provoked many a 4Channer into a frothing rage.

Bronies, of course, drew no shortage of amusement from triggering the internet’s most infamous trolls with cartoons enjoyed by 4-year olds. 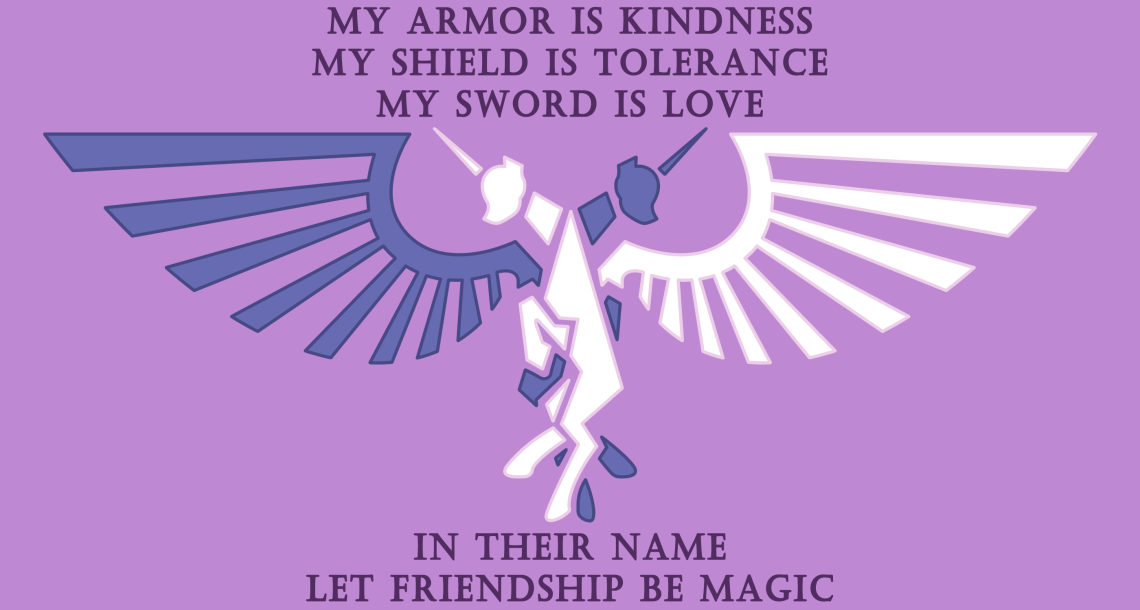 Aside from /b/, bronies also loved raiding fans of Warhammer 40,000. They presented a similar façade as /b/, although with less pornography. Something about the spikey mutants and raging chaos warriors just screamed “Troll me with cute ponies!”

But these raids had the unexpected result of purifying the chaos-field hearts of many 4Chan users. For every troll who went off the rails spamming pictures of pony gorn, at least one other discovered that the rainbows and smiles calmed the broiling rage in their black and helped them find an emotional center. Many, disarmed and curios, went to YouTube to watch an episode and find out what the fuss was all about.

Thus did the Great Heresy begin.

Another reason might be how, in a weird way, the worlds of MLP and 40K kind of fit. With a little stretch of the imagination (or a lot), the corruption of Luna into Nightmare Moon could be interpreted as a watered down, G-rated chaos corruption. 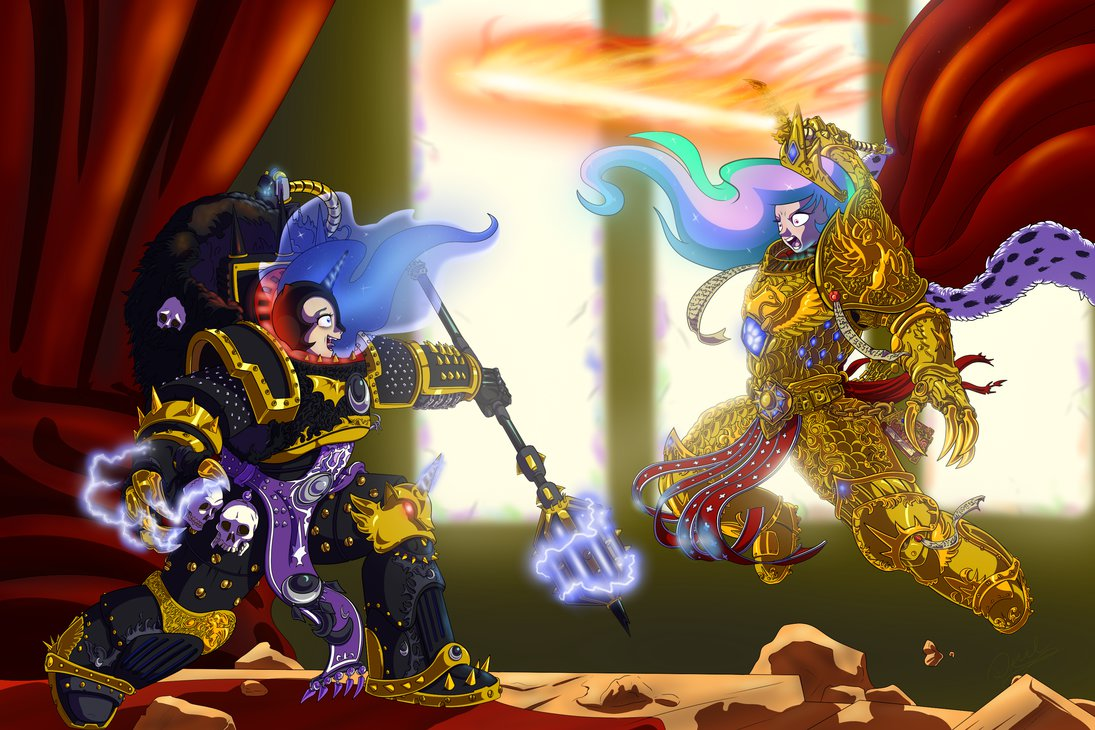 And because the galaxy of Warhammer 40,000 (the Milky Way) has an estimated 100 billion planets with many worlds and alien species going un-noticed for Celestia knows how long, the world of Equestria could easily fly under The Imperium’s radar. Even the unusual star movement could be overlooked unless some Mechanicus outpost just happened to turn its telescopes in that direction.

The interplay of ideas has spawned no shortage of art and ideas. The Elements of Harmony cured Luna of her nightmare. Could they purge the hearts of a Chaos space marine the same way brony spam purged the hearts of so many 4-Channers?

Fans express love of ponies in both sides of fandom, from artists writing fics about Celestia defending against The Imperium to players who paint Twilight Sparkle themed space marine chapters, purging the grimdarkness of Warhammer 40,000 in the name of their cute furry overlord. 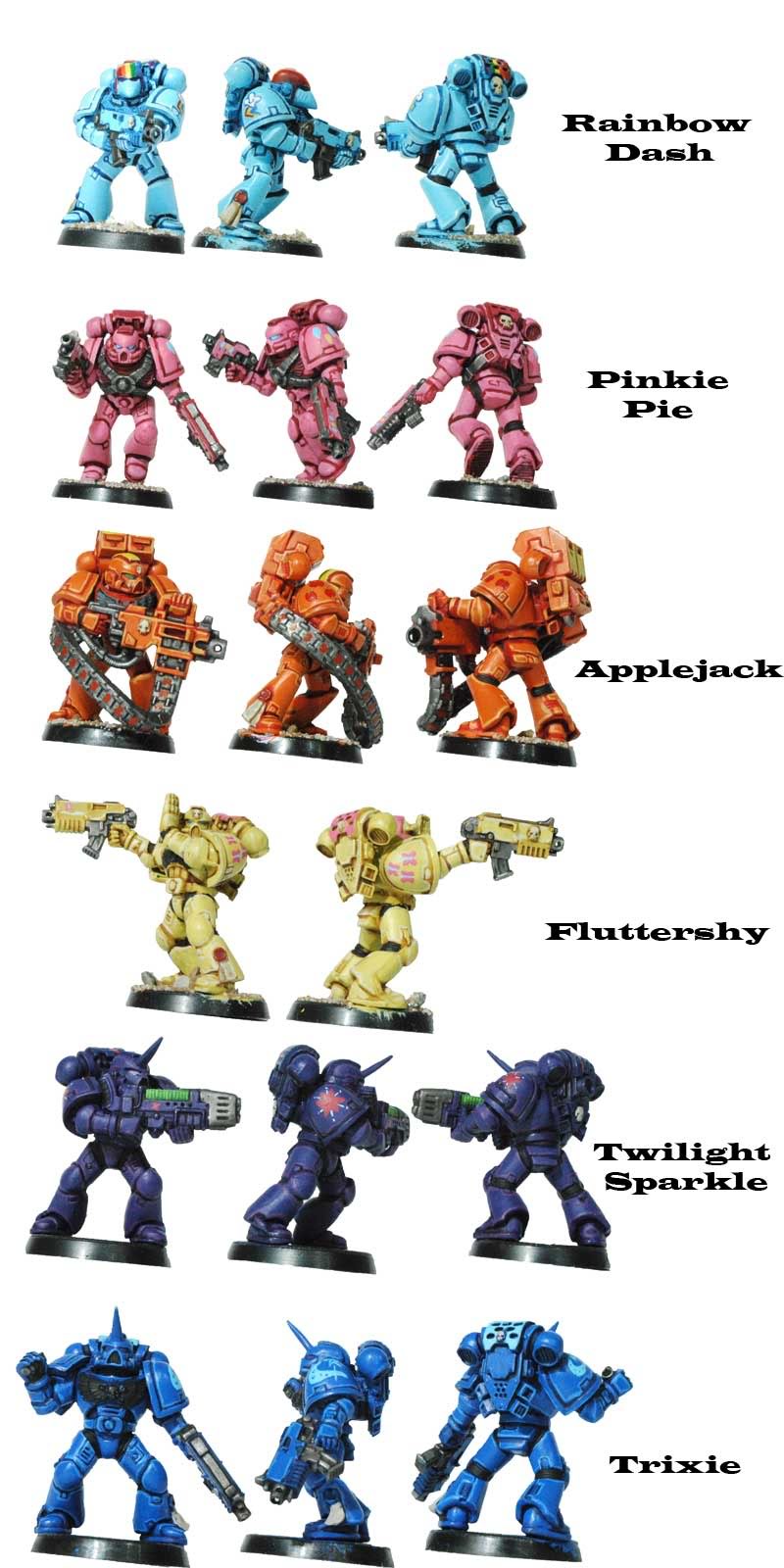