Warhammer 40,000 takes place in the future Milky Way Galaxy, where the Imperium of Man controls most of the solar systems. In the brutal galaxy of cruelty and destruction, humanity has blasted its way across the stars in a never-ceasing quest to exterminate every single race that is not human: full-blown genocide, even against any non-hostile alien society they find.

But humanity’s holy war against the xenos (aliens) lost much of its progress with the great civil war, The Horus Heresy, which pit humanity in a 10,000 years long war against the same demons of the warp their own violence and hatred created.

Any number of lessor demons and gods reside and go to war with each other within the warp, which is a quasi-physical manifestation of the thoughts of every organic creature, but four gods stand taller than all of the others.

The Lord of Change, The Architect of Fate. To tell a lie is to worship Tzeentch, the god of betrayal, ambition and deception.

Much beloved by Tzeentch are those who would do anything to succeed. But although the Lord of Change smiles on those who seek to change their destiny, The Architect of Fate also has a habit of leading these people to their own destruction in the furtherance of his own unfathomable plans.

Father Nurgle, The Plague Lord, or the Lord of Decay. Unique among the four greatest of the Chaos Gods, Nurgle loves life. In fact, he loves all life, including the parasites that ravage a victim’s flesh or the viruses that rot brains from the inside out. These small viruses are of no less value than a walking, talking human being, and there are far more of them.

As with Tzeentch, those who are unhappy with their lives may find the love of Father Nurgle. But unlike Tzeentch, Nurgle does not promise glory or encourage ambition. Nurgle teaches his followers, usually against their wills, to be content in the knowledge of who they are and the gifts they can give already. Every human being is a mother to millions of germs and microscopic organisms.

As the Lord of Decay infects his worshippers’ bodies with his gifts, their flesh rots and bloats as the hungry viruses and parasites ravage them from the inside out. While still living, they give the ultimate gift of their bodily flesh to those who are smaller and weaker than they are.

The Blood God. Khorn is the psychic manifestation of all the rage of every sentient creature. In the grimdark future of Warhammer 40,000, where there is only war, this makes him very powerful. ‘

Every act of murder pleases The Blood God, including the cowardly murders of those weaker than the killer. But this presents a contrasting nature to the Chaos God because Khorn is also the god of martial pride, and loves the honor and glory of champions trying to destroy each other.

Because Khorn, like every Chaos God, is an aspect of the minds of sentient beings, the most common sentiments about war and slaughter will dominate. And while there is certainly no shortage of cowardly murderers on any Imperial world, the numbers of warriors outnumber them by a significant amount. And these warriors, with exceptions, tend to abhor wanton murder.

Unless, of course, it’s an act of genocide against an enemy.

The Prince of Pleasure, She Who Thirsts.

Although sex certainly dominates the idea of Slaanesh, the Prince of Pleasure also adores music and art. Warriors and artists who seek the joys of perfection in their skills all contribute their own desires to the glory of Slaanesh. 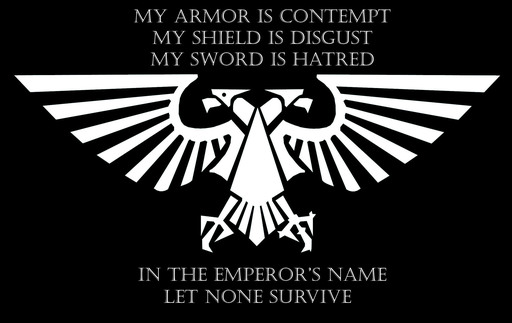 Guarded by the mighty Space Marines and countless billions of Imperial Guard soldiers, the Imperium of Man battles the forces of Chaos and every xeno they find in order to cement their rule of the galaxy, which they view as their destiny given to them by The God Emperor of Man.

His name is unknown, but his psychic (psyker) powers were second to none. A giant, both in size and psychic power, The Emperor of Man was a living god who surely would have conquered the entire galaxy with his armies of Space Marines, led by his bio-engineered children, The Primarchs.

But 10,000 years prior to the 41st Millennium, The Emperor was betrayed by the greatest of his own sons: Horus the Favored. Half of the 18 known Primarchs and 18 Space Marine Legions joined together under the banner of chaos in a civil war that saw both Horus, and the Emperor, dead.

But The Emperor, though dead, still retains a spark of that psychic power. Sitting on the arcane Golden Throne, The Emperor’s psychic light shines as a beacon in the warp to this day: a lighthouse in a hellish ocean which allows ships to successfully navigate the warp as they travel between the stars.

Built from the genetic material of The Emperor’s own Primarchs, the Space Marines are about seven feet tall. These armored, genetically and surgically enhanced warriors are the Imperium’s last, greatest weapon against the xeno and the predations of Chaos.

In any other circumstances, failure to worship The Emperor or to follow another religion will inevitably result in a death sentence within The Imperium. But this is not so for the followers of The Machine Cult.

The Adeptus Mechanicus are the king priests of technology, with a total monopoly on the production of all machines or scientific research. Tech Adepts believe that the machines have souls, and every act of repair or tuning of an engine involves a ritual: a prayer at the very least.

The Imperium of Man is constantly at war with every race of Xenos. Although some, like the Eldar and Tau, have sometimes formed temporary understandings with humanity, none would dare turn their back on the Imperium for all know of humanity’s ultimate goal: to kill every single alien in the galaxy.

Very much the same as the orcs found in fantasy literature, but the Orks of Warhammer 40,000 (and Warhammer, the high fantasy series) are creatures made of spores and fungus shaped into muscular, hulking brutes. They reproduce by constantly shedding plant spores from their own flesh, especially when they die.

Orks must be the favorite xeno race of Khorn, because the Orks love war above all other things. For the green skins, exploding artillery shells and burning tanks are the ultimate party. They war with other races, chaos, or with each other, and they mostly just do it for fun.

The Tau are the closest thing Warhammer 40,000 has to “good guys.” Unlike every other race fighting for domination of the galaxy, the Tau prefer not to exterminate nor even enslave their enemies. Rather, they add their conquered enemies to The Tau Empire and begin the process of reeducation.

All in the name of their philosophy, The Greater Good. The Tau seem to be modeled after a socialist dystopia, such that written by George Orwell in the book, 1984.

The Eldar and The Dark Eldar

After the coming of She Who thirsts, the survivors of the Eldar Race split into two factions. The Eldar, modeled after elves, are majestic and long lived. Their race is led by powerful psykers called Farseers who navigate through the webs of fate to guide the Eldar to safety.

Slaanesh slaughtered most of the Eldar’s own gods, leaving them no one to protect them from him/her in the afterlife. The Eldar came up with a solution of transferring their souls, upon death, to stones which they fiercely defend against Slaanesh and her demons.

If they should ever falter in their defense, Slaanesh will consume the souls of all the great and honorable Eldar and damn them to an eternity of humiliation and suffering.

But while the Eldar chose a noble path, the Dark Eldar only intensified their pursuit of pleasures which gave birth to Slaanesh in the first place. This doesn’t seem like such a sin on its face, at least in modern times, but Dark Eldar pleasure usually comes in the form of torture.

The Dark Eldar are the most cruel and terrifying predators in the galaxy, constantly seeking new slaves to give to their Haemonculi to dissect and shape into tormented monstrosities. Using the power of sorcery, they harness the psychic energy of their victims’ agony to extend their lives.

This is the only way for the Dark Eldar to escape the predations of Slaanesh, because they are not able to transfer their souls to gem stones. Even if they were, other Dark Eldar would surely destroy those gem stones just for the sadistic glee of damning their souls. For although the Dark Eldar worship Slaanesh, this does not grant them any mercy. Slaanesh hungers for the souls of Dark Eldar every bit as much as their more noble cousins.

Massive armies of nearly invincible black metal cyborgs slumber beneath the worlds of the Imperium of Man, just waiting, like a volcano under a city, to awaken and destroy everything.

Long before the coming of The Emperor, an ancient and warlike race saved its self from extinction by transferring their minds to machines. Now they wait, and when they awake, they have only one desire: to kill everything that lives.

The Necrons operate on a technology more advanced an arcane than anything seen in The Imperium or its enemies. The metal of their bodies can actually self-repair, and whey they are finally put down, their bodies teleport away in a bloom of green energy, to be repaired and unleashed once again.

A mindless, chitinous swarm, the Tyranids invade from an entirely different galaxy, sending massive hive fleets to the Imperium of Man or its neighboring enemies with only one goal in mind: to devour.

Much like The Zerg of Starcraft (modeled after the Tyranids), these aliens are a hive mind that consume entire worlds, assimilating their victims’ genetic material and using it in their own spawning pools to make more efficient warriors.